In this post we will not know all the varieties of olives, apart from naming them. But we will learn something about those that predominate in the Sierras Subbéticas Natural Park and surroundings, in the southeast of the province of Córdoba.

As we have already mentioned, there are many types of olives in Spain. The most popular and that are dedicated to the production of olive oil are: the aloreña, arbequina, blanqueta, cordobesa, cuquillo, empeltre, gordal, hojiblanca, lechín, manzanilla, obregón, picual, picuda, ramona, serrana, verdejo and verdial.

But we will focus on five of them: arbequina, lechin, picual, hojijblanca and picuda. The last three are varieties of olives that predominate naturally in the Sierras Subbéticas Natural Park and its surroundings. And the Arbequina, originally from Catalonia and Aragon, in recent years has been planted a lot in Andalusia for its great adaptation and performance, as well as for its extraordinary characteristics. Besides Lechin, wich we add for being one of the most extended olive variety in Andalusia, specially in Cordova, Seville and Granada. Althought of this variety we only have one evoo for cooking, the Señorio del Sabinal.

From these five kinds of olives, the olive oil that we sell in La Tinaja del Gourmet is produced, Premium EVOO and EVOO for cooking of excellent quality.

This olive, typical of Catalonia and Aragon, has spread in a very important way and not only in Spain. This is due to its great adaptability both to different soils and to different climates.

In addition, it is an olive that is easy to harvest and has a high yield, since despite its small size the oil content that is extracted is high.

Its name, Arbequina, comes from the town of Arbeca, in the province of Lleida. Its shape is short and elliptical, medium-small in size and has a green color that tends to yellow as it matures.

The oil that is extracted from this olive, called Arbequina olive oil, is very soft, sweet and aromatic. In addition to having a fruity aroma and flavor, with a slight apple flavor, herbaceous green, very little bitter and spicy. Thus, it is the opposite of Picual olive oil, for example, which is an olive oil with a strong, very bitter taste.

Of all the types of olives, the Picual olive is the most cultivated, with Jaén being the province where it predominates the most. Córdoba and Granada are also provinces where it is widespread.

The name of picual comes from the shape of the olive, ellipsoidal, with a pointed end. Its size is medium and when it matures its color is black.

It is a high-yield olive as it has a very high oil content, as well as a high percentage of natural antioxidants compared to other kinds of olives. Its strong and bitter taste makes us notice it, an unmistakable feature of Picual olive oil.

In addition, another very important characteristic of Picual olive oil is that it is highly stable. Thus, this attribute influences its storage as it is more resistant to oxidation. And to cook it better withstands high temperatures.

The Hojiblanca or Lucentina olive is a variety that predominates especially in the province of Córdoba. In fact, the name of Lucentina comes from being the town of Lucena where it is more widespread and where the Denomination of Origin of Lucena originated. Likewise, the name hojiblanca is due to the white color of the olive leaf.

This variety of olive is medium in size and symmetrical in shape. When it has reached its optimum ripeness state, it acquires a red-violet color.

As for its bitter taste, it is very balanced. Neither very bitter nor very soft, just right. At the end, the characteristic hotness of olive oil is appreciated.

This olive, called picuda or carrasqueña, is characteristic of the area of the Sierras Subbéticas Cordovan Natural Park and surroundings. And specifically in the areas of Priego de Córdoba and Baena, in the province of Córdoba. In fact, it is included in both Protected Denominations of Origin.

Its size is large, and it gets its name from the asymmetrical shape of the olive, ending in a beak or nipple. In addition, it is an olive with a more minority area of cultivation compared to the Hojiblanca olive or Picual olive, for example.

Even so, its cultivation area extends through the provinces of Granada, Jaén and Málaga, as well as Córdoba, without becoming the predominant variety. One of the reasons it is planted a lot with other varieties is to aid pollination.

Likewise, the olive oil produced by this Picuda olive is delicate and fruity, with light flavors and aromas that are reminiscent of exotic fruits in addition to tomato, apple or almond. It is an olive oil that is highly appreciated not only in Spain, but also in the rest of the world. And there are many prizes won by olive oils from this variety of olives.

This olive, concentrated in the provinces of Seville, Granada and Cordova, owes its name to the whitish color of its pulp, similar to milk. It is named in different ways, depending on the area. Thus, we can recognize it as Lechín de Sevilla, Lechín de Granada, Ecijano or Zorzaleño.

The lechín olive tree is highly resistant to drought and adapts very well to limestone soils, which are very unfavorable to cultivation. Harvesting this variety of olive is very expensive and difficult since the fruit is very well attached to the tree, and manual harvesting is necessary. Due to the latter, the area cultivated by this olive tree has decreased in recent years, since it is not viable with a mechanized harvesting, which is what is demanded in modern agricultural production.

Lechín olives are elliptical in shape, curved on the back, and weigh approximately 3 grams. Its oil content is around 18%, not being as productive as other varieties.

Finally, I hope this post has been interesting for you and that it helps you to know a little more about these types of olives with which some of the most appreciated EVOO in the world are produced. 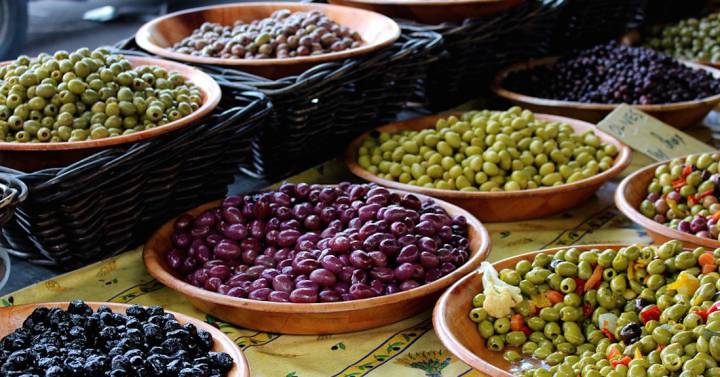 Article Name
Varieties of olives
Description
There are many types of olives that exist in Spain, it is not by chance that it is the first olive oil producing country in the world. In this article we will emphasize the varieties that we find in the Parque de las Sierras Subbéticas de Córdoba and surroundings.
Author
Fran
Publisher Name
La Tinaja del Gourmet
Publisher Logo