Taste the Señorío del Sabinal extra virgin olive oil, a juice with an intense and fruity flavor to cook or take raw with good toasts. It is an EVOO made from picual, hojiblanca and lechín olives. 5 liter plastic bottle.

We show you an olive oil for cooking: Señorío del Sabinal in a 5-liter jug. Its intense and fruity flavor will not leave you indifferent and you will want to use it both to cook your stews and to fry meats. As well as to taste it raw with some good toasts or in a salad.

It is an extra virgin olive oilof the hojiblanca, lechín and picual olive varieties, which come from centenary olive trees. Its collection is manual and in an early stage, without reaching an excessive ripening of the olives. And only “flight olives” are used, which are olives that are harvested directly from the olive tree or do not touch the ground directly.

When the olives are harvested in an early stage, this gives the olive oil an intense and fruity flavor, as well as a green color. Likewise, the milling is cold as it could not be otherwise in a self-respecting Extra Virgin, conserving its properties to the maximum.

The Señorío del Sabinal farms are located in the province of Seville, specifically in the town of Osuna. The climate of the place, of a significant contrast between summer and winter temperatures, gives olive oil a strong character for which it becomes the protagonist in your kitchen.

The Señorío del Sabinal olive oil brand is marketed by Grupo Foods Olive Osuna sl. A company with experience in the olive trade since its creation in 2006. In 2018, with the acquisition of an oil mill, it began its path in the production and sale of olive oil under the Señorío del Sabinal brand. In addition to the oil mill, it has farms owned by it and other farmers for the supply of olives to which strict quality controls are applied. 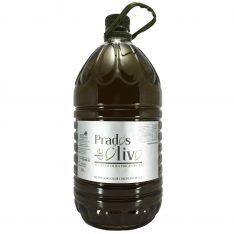