Taste the Señorío del Sabinal extra virgin olive oil, a superior category juice with an intense and fruity flavor ideal to take raw with good toasts. It is an EVOO made from picual and lechín olives. Glass bottle 500 ml.

Taste the superior quality evoo Señorío del Sabinal in a 0.5 liter Doric glass bottle. It is a juice with an intense and fruity flavor and you will want to taste it especially raw with some good toasts.

This juice is considered of premium quality and is limited edition, not to be confused with the format that we also present of Señorío del Sabinal in a 5-liter jug. The latter is ideal for cooking.

It is an extra virgin olive oil of the Lechín and Picual olive varieties, which are harvested from centenary olive trees. Many of them over five hundred years old. The olive harvest is manual and in an early stage, without reaching an excessive ripening of the olives. And only “flight olives” are used, which are olives that are harvested directly from the olive tree or do not touch the ground directly.

By picking the olives at an early stage, this gives the olive oil an intense and fruity flavor, as well as a green color. Likewise, the milling is cold as it could not be otherwise in a self-respecting Extra Virgin, conserving its properties to the maximum.

The Señorío del Sabinal evoo farms are located in the province of Seville, specifically in the town of Osuna. The climate of the place is of a significant contrast between the summer and winter temperatures. And it gives olive oil a strong character for which it becomes the protagonist in your kitchen.

The Señorío del Sabinal oil brand is marketed by Grupo Foods Olive Osuna sl. A company with experience in the purchase and sale of olives since its creation in 2006. In 2018, with the acquisition of an oil mill, it began its path in the production and sale of olive oil under the Señorío del Sabinal brand. In addition to the oil mill, it has farms that it owns and that of other farmers for the supply of olives to which strict quality controls are applied. 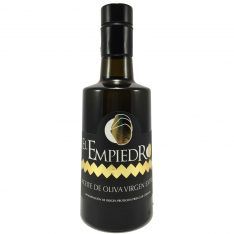 From 6,50 € Tax Incl /ud
Manage cookie consent
To offer the best experiences, we use technologies such as cookies to store and/or access device information. Consent to these technologies will allow us to process data such as browsing behavior or unique identifications on this site. Not consenting or withdrawing consent may negatively affect certain features and functions.
Manage options Manage services Manage vendors Read more about these purposes
See preferences
{title} {title} {title}