A wise decision when you want to add value to a gift. Case with two bottles of Premium Cladivm extra virgin olive oil. 500 ml glass bottles in black case.

The case includes two 500 ml bottles, one is Cladivm Picudo and the other is Cladivm Hojiblanco.

The extra virgin olive oil Cladivm Picudo and the Cladivm Hojiblanco are two monovarietals of the picuda and hojiblanca olives, respectively. Both are protected under the DO Priego de Córdoba, an international reference designation of origin.

The reason why they are harvested so early is to achieve the highest concentration of organoleptic properties in the olive. Likewise, this is also the reason that the production is lower since the olive does not finish maturing and therefore the juice extraction has fewer liters.

Aroden is the company that produces the Cladivm brand and has quality accreditations and complies with laws that grant its products a guarantee of control and quality. The most relevant are the following:

As for its recognition, there are many awards given to the Cladivm brand in different international competitions. As an example, in 2017 and 2018 the total awards amounted to 24 between medals, distinctions, diplomas, etc …

Aroden is an oil mill located in Carcabuey (next to the Sierras Subbéticas Park) and which was established at the beginning of this 21st century. Even so, the olive tradition of its farmers, like those of its previous generations, go back to ancient times in the cultivation of olive trees.

Choosing Cladivm extra virgin olive oil in a case is undoubtedly the right decision when you want to add value to a gift.

In the olfactory phase it behaves like a medium fruity olive with ripe tones, almond and grass aroma, fruit like apple and leaf olive tree. The palate is sweet, followed by a medium spiciness and a subtle bitterness. 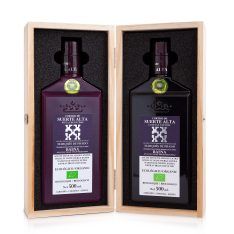 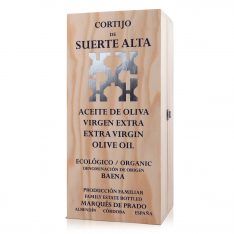 39,60 € /ud
Manage cookie consent
To offer the best experiences, we use technologies such as cookies to store and/or access device information. Consent to these technologies will allow us to process data such as browsing behavior or unique identifications on this site. Not consenting or withdrawing consent may negatively affect certain features and functions.
Manage options Manage services Manage vendors Read more about these purposes
See preferences
{title} {title} {title}