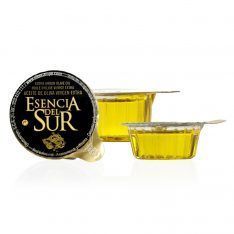 Extra virgin olive oil of the picual variety ideal to consume raw. And in a single-dose format ideal for restaurant business. Single dose 20 ml in box of 100 units.

Extra virgin olive oil of the Esencia del Sur brand in single dose of 20 ml. This EVOO of the picual variety is ideal to consume raw due to its bitter taste and itching, an olive oil with an intense flavor that leaves no one indifferent. In addition, due to its great stability provided by its high content of polyphenols, this olive oil supports higher average temperatures and is also ideal for cooking.

In addition, the 20 ml single dose olive oil is an ideal format for restaurants, practical and hygienic when handled by the diner.

The picual olive, also known as marteña, nevadilla or lopereña, is predominant in the province of Jaén (Andalusia, Spain), the origin of this olive oil.

Virgin Olive Oil of the picual variety is a more stable oil and resistant to oxidation than that obtained from other varieties, so it is better preserved and is ideal for cooking. And it contains a high proportion of oleic acid, so its consumption is healthier. As for its flavor and aroma, it stands out for its bitterness and itching, being an intense olive oil.

Oleocampo was established in 1995 and is currently made up of five mills located in the southern countryside of the province of Jaén. Specifically in the municipalities of Torredelcampo, Torredonjimeno and Villardompardo. These five mills produce the olive oil that will later be bottled in the Oleocampo bottling plant.

The extension of the olive groves they cultivate extends to 10,812 hectares of olive groves. And the cooperative partners are estimated at 3,472. Obviously, Oleocampo is one of the largest producers and marketers of olive oil in Spain.

In addition, Oleocampo not only produces the Esencia del Sur brand, but also markets its Premium Oleocampo brand. An extra virgin olive oil that is produced from olives harvested during the first days of the harvest. The reason why they are harvested so early is to achieve the highest concentration of organoleptic properties in the olive. Likewise, this is also the cause of the production being lower since the olive does not finish ripening and therefore the extraction of juice is less in liters.

The picual olive variety is characterized by its bitterness and itching when consumed raw, for example in salads. A leading olive oil on the table.