Premium Aove that stands out for its bitter and itchy flavor, intense and rich in nuances. It is a protagonist olive oil in your kitchen, it does not leave you indifferent in its raw consumption. 500 ml glass bottle.

The Cladivm brand has incorporated Cladivm Picual into its catalogue, which would complete the existing range of Cladivm Picudo and Cladivm Hojiblanco premium extra virgin olive oil.

Like its predecessors, it is a monovarietal EVOO that is protected under the PDO of Priego de Córdoba, an international reference in the olive oil sector.

The picual olive, also known as marteña, nevadilla or lopereña, is predominant in the province of Jaén. However, it is also abundant and of very good quality in the Subbética region of Cordoba, where this premium EVOO is produced.

Virgin Olive Oil of the picual variety is a more stable oil and resistant to oxidation than that obtained from other varieties, so it is better preserved and is ideal for cooking. And it contains a high proportion of oleic acid, so its consumption is healthier. As for its flavor and aroma, stands out for its bitterness and itching, being an intense olive oil rich in nuances.

The reason why they are harvested so early is to achieve the highest concentration of organoleptic properties in the olive. Likewise, this is also the cause that the production is lower since the olive does not finish ripening and therefore the juice extraction is lower compared to a ripe olive.

Buying Cladivm Picual olive oil is undoubtedly the right decision for any lover of this olive so characteristic that it is picual.

It is characterized by its bitterness and itching, being an intense olive oil rich in nuances. 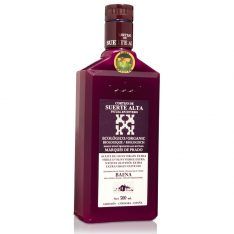 Rated 5.00 out of 5
9,70 € /ud
Manage cookie consent
To offer the best experiences, we use technologies such as cookies to store and/or access device information. Consent to these technologies will allow us to process data such as browsing behavior or unique identifications on this site. Not consenting or withdrawing consent may negatively affect certain features and functions.
Manage options Manage services Manage vendors Read more about these purposes
See preferences
{title} {title} {title}