Enjoy one of the most recognized and awarded extra virgin olive oils from the DO de Priego de Córdoba. Ideal to take raw in order to perceive its multitude of nuances. Glass bottle 500 ml.

Taste Parqueoliva Serie Oro extra virgin olive oil, a blend of Picuda and Hojiblanca olive varieties and considered Premium olive oil. It is one of the most awarded olive oil in Spain and the world and is regulated by the Protected Designation of Origin (PDO) of Priego de Córdoba.

Its tasting notes are of a medium / intense green fruity and complex. With a great variety of herbaceous and fruity nuances both in the nose and in the mouth, which makes its tasting a sensory experience. To taste and perceive all these nuances it is recommended to take it raw. Either accompanying some toasts, or salads, pasta, carpaccios, meat, blue fish or gourmet dishes.

This Premium extra virgin olive oil is a coupage of the varieties of picuda and hojiblanca olives that are harvested in the first days of the season. The olives come from centenary mountain olive trees within the Sierras Subbéticas Natural Park, specifically in the municipality of Carcabuey, Priego de Córdoba and other neighboring municipalities. And they are carefully selected for the production of this very special olive oil.

This olive oil is possibly one of the most awarded. In 2019 he obtained a total of 40 awards in different competitions. Likewise, in the last 5 years it has obtained more than 160 prizes and awards, and since 2000 more than 300.

It is worth highlighting the positions achieved in the most popular and accredited rankings worldwide. In the World’s Best Olive Oil ranking, the trajectory of the different olive oils is valued in the contests that are held throughout the year, Parqueoliva Serie Oro has ranked in the Top 10.

Almazaras de la Subbética has a long history in the world of olive oil. It was established in 2007 and is the result of the merger of two cooperatives that had more than 60 years of history in the sector. This oil mill is in the municipality of Carcabuey, next to the Natural Park of the Sierras de la Subbética Cordobesa. In addition, its olive groves are located within this mountainous park and which gives so much character to its olive oil.

The mill, like its olive oils, is recognized on many occasions with awards for its good work. As an example, we highlight the award for Best World Olive Oil Mill achieved in 2013, 2015, 2016 and 2017. It was also awarded in July 2020, by the prestigious world ranking “World’s Best Olive Oils”.

Do not miss the opportunity to buy ParqueOliva Serie Oro olive oil, a Premium EVOO considered an authentic gem by EVOO lovers.

Its aroma is of an intense green fruity, with fruity nuances such as apple and green banana. With notes of vegetables such as tomato bush and artichoke. And with great intensity you can see the freshly cut grass and the green almond. When entering the mouth it is sweet, with a flavor of green almond, bitter and spicy of medium intensity. Balanced olive oil with a great personality. 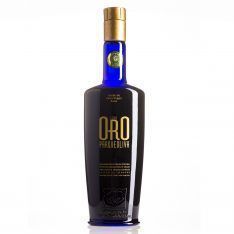